()
2019 Entertainment Schedule That’s Sure To Get You Dancing
POST BY: admin in NC Pickle Festival with 0 Comments 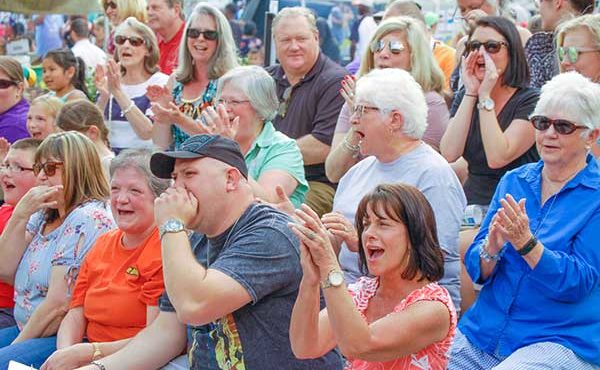 There are so many parts that make the NC Pickle Festival the magical event that it is each and every year. From the vendors, to the sponsors, to the activities, and the entertainment, each part plays an integral role of making the event a success. We wanted to take a minute to highlight the bands and musical acts who set the stage and ambiance for festivalgoers. We have many great groups set to perform for us this year and we can’t wait to jam out all weekend long.

From 6-8p.m., the Feral Cats will kick off the festival with their dance blues that are sure to make you groove. The group began in the summer of 2018 when the four strangers, Kimberly Kornegay, Kevin Burrus, Rick Cypher and Chris Shupe met a few times to see if this troupe would gel and they quickly found “the groove”. Hard work, dedication to their craft and the love of the blues has quickly set this band apart and they have been making the crowd dance ever since.

Following the Feral Cats, Steel County Express will take the stage from 8-10 p.m. Friday evening. This group is a modern country and rock party band, based right here in Eastern North Carolina. They “deliver a high energy show from the first song to the last every time.” They play a mix of current favorites, classics, and some SCE originals which entertain crowds of all ages.

Four acts will be featured on the main stage of the NC Pickle Festival throughout the day on April 13th. If you love music and dancing, there will be no shortage of entertainment for you.

Immediately following the Opening Ceremony, EagleWing will start things off bright and early at 9:10 a.m. EagleWing, an Eagles Tribute Band, will perform until 11:10 am. The group will take you on a musical journey from 1971 through 2007, with songs that shaped your life. “EagleWing has crafted each song to be as close to the original recording as possible from the carefully orchestrated guitar and keyboard work to their signature vocal harmonies.”

Following EagleWing, British Invaders open up in the early afternoon with a Beatles Tribute from 11:25 a.m. to 1:25 p.m. This group is a celebration of 1960’s British Rock and Roll featuring songs from all the major bands of that era. The group even dons matching Nehru collared British suits and use the best in vintage 1960’s musical equipment. Talk about authentic!

Rivermist will take the stage next and perform from 1:40 to 3:40 p.m. This variety group is a collaboration of musicians that have been playing in and around the Fayetteville, NC area for over 20 years. They love to appeal to the audience while preserving a genre of music familiar to their roots. They are primarily a classic rock and variety party band and have racked up some notoriety and awards in NC in recent years. The group was voted 2016 Best Local Band by Fayetteville Observer’s Reader’s Choice and 2017 Best Local Band by Up and Coming Magazine.

Finally, from 4:00 until 6:00 p.m., Ultimate Rock Machine will help us rock out the last few hours of the NC Pickle Festival. The group’s beginning came after the current members toured on a national production called This is The 60s. The group now performs songs from the 80s Big Rock Concert era – the biggest hits by the biggest bands delivered in a family-friendly, high-energy show. Audiences will recognize, remember, and return to their younger days.

Additional entertainment will occur in tandem with the NC Pickle Festival throughout the two days. Guests will get to see Jingles the Clown, Patrick O’Brien – a Fruit Carving Ninja, and Glen Yost, a magician and comedian. There will also be Fresh Start Rescue bringing live reptiles and King BMX Stunt Show performing their amazing stunts. We are looking forward to a fun weekend of live music and engaging entertainment at the 2019 NC Pickle Festival. For more information on the entertainment lineup, visit our website at ncpicklefest.org.

Categories
Popular Posts
Archives
HOW TO

This error message is only visible to WordPress admins

The Juicy Highlights from The 2019 NC Pickle Festival
Last month, we celebrated the 33rd annual North Carolina Pickle Festival and what a day of fun it was! While rain and damp weather was forecasted throughout the weekend and
Read more ...
Get Glowing and Sign Up For The Cuke Patch 5k Glow Run
Friday night and we’re feeling alright! That is the vibe you can expect this year on Friday, April 12th. Downtown Mount Olive will be buzzing with energy and excitement as
Read more ...